It’s June 15th, exactly one month since my last day hosting the morning show. I can’t say the month has been breezy, but I can say how eternally grateful I am to Susan and Tristan for reminding me life is always wonderful and, even jobless, I’m still who I was.

I was in university taking an introductory psychology class when I first heard about a scale that put numerical values on life changes in order to evaluate the stress they can cause. The scale was developed in 1967 by researchers Holmes and Rahe. Losing a job is ranked eighth on the scale, ahead of "marital reconciliation" and behind "marriage". The scale provides a stark reminder there are far more unkind fates.

Life changes lurk "nowhere" and "in the blue", and that’s where they pounce from - out of nowhere and out of the blue! Many people ask me whether I had any indication I would lose my job and I tell them, from my point of view, unless I missed something, there wasn’t even an indication of an indication.

It was Thursday April 9th and as I sat editing an interview for our weekly “best of the week” show, my boss asked to see me in her office. She told me my job had been cut. Her words splashed on forehead like searing acid, burning their way into my brain and slowly sinking downward to my heart.

Like anyone who is the victim of job cuts, you wonder how, in the end, all your contributions can be worth so little. The pouring of energy, creativity, vision, talent, dedication, discretion, health, determination and so many other qualities, amount to nothing more than a perfunctory severance payment.

I’ve had several of my jobs cut before but this show, project, and work, meant more to me. I can honestly say I never took the hosting position for granted and I had said to Camille many times what a thrill it always was to hear my name announced as each new half hour of the show opened! Having my name attached to a show was an exciting first for me!

That last day one month ago was difficult, and the sign-off, dreadfully precarious. One wrong word or move by anyone would have caused me to unwind emotionally on-air.

Just as we came out of the last commercial break, Julie, one of our directors, declared quietly in my earpiece, “It’s been an honor”.  Managing a weak smile, I waved my fist at her through the camera, struggling to hold it together. Thankfully, Camille respected my request to do, and say nothing, out of the ordinary. Media critic Steve Faguy hit the nail on the head when he later observed I signed off that last Friday as though I would see viewers on Monday. It took immeasurable effort just to manage what he perceptively described as my “see-you-Monday” wave! 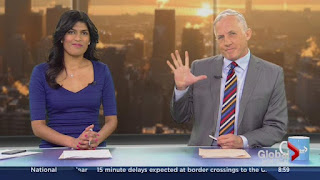 To say losing my job was disappointing would be to severely understate the situation. There are many questions I wish I could have management answer for me. Time is healing the sense of rejection and I hope to find fulfilling full-time work. One of my twitter followers, @DangerZone007, asked me yesterday how the adjustment is going, not being in front of the camera anymore; it’s a good question, I’m pretty sure it’s an adjustment that will be ongoing.

Overwhelmed by sadness, I wasn’t able to enter the room where staff had gathered after the May 15th show to say goodbye to the employees who had been cut. I lingered outside for a moment or two until the swollen lump in my throat could no longer hold back the emotion, and then I quickly turned for the exit, stepped out into the hallway and blubbered my way to the elevator.

Thank you so much for all the supportive comments I’ve been getting in e-mails, on twitter and in person from viewers of the show. Leonie’s comments meant so much.

On the very first show, I told viewers I had been described by news anchor Jamie Orchard as the frog in the box that bursts into song whenever the lid is opened. A month ago, the box closed, but Michigan J. Frog is tapping on the lid, hoping to get back out.

Posted by Richard Dagenais at 12:16 PM